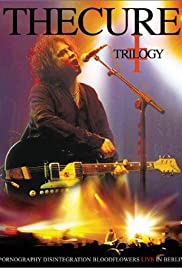 The Cure: Trilogy is a double live album video by The Cure, released on two double layer DVD-9 discs, and later on a single Blu-Ray disc. It documents The Trilogy Concerts, in which the three albums, Pornography (1982), Disintegration (1989) and Bloodflowers (2000) were played live in their entirety one after the other each night, the songs being played in the order in which they appeared on the albums. Trilogy was recorded on two consecutive nights, 11–12 November 2002, at the Tempodrom arena in Berlin. A third, previous Trilogy concert in Brussels on 7 November was not used.