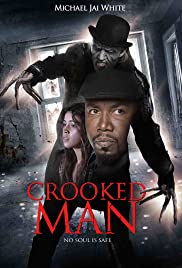 While at a slumber party, twelve-year-old Olivia is blamed for the horrific and mysterious death of her friend after singing a song, created by a reclusive mastermind, Milo, which summons a demonic figure known as “The Crooked Man.” Returning to her hometown six years later, a string of unusual deaths lead Olivia to believe that she’s still being haunted by whatever she saw that fateful night. Once you sing the rhyme, everyone in the house is cursed to die by his hands.