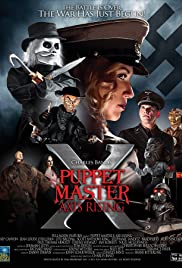 Puppet Master X follows the characters of Danny as he attempts to rescue his girlfriend Beth with the help of Toulon’s puppets. However their help is short lived as they end up getting stolen by Ozu (Terumi Shimazu). Danny and Beth must try to rescue the puppets while trying to defend themselves against a new batch of puppets. Meanwhile the occultist Commandant Moebius is attempting to use the serum that animates the puppets to create a master race and take over the world