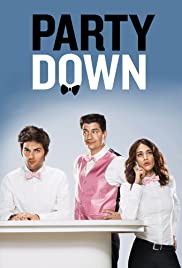 Party Down is an American comedy television series that follows a Los Angeles, California, catering team for the titular company. The sextet of aspiring Hollywood actors and writers, as well as drifting lost souls, work small-time catering gigs while hoping for their break or some positive change in their lives.