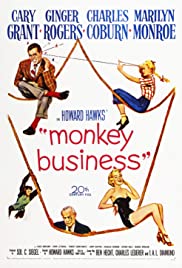 Barnaby Fulton is a research chemist working on a fountain of youth pill for a chemical company. One of the labs chimps, Esther, gets loose in the laboratory and, having watched Dr Fulton do something similar, mixes a beaker of chemicals, but then pours the mix into the water cooler. Later, when trying one of his own samples sample, washed down with water from the cooler, Fulton begins to act just like a 20-year-old and believes his potion is working. Soon his wife and boss are also behaving like children.