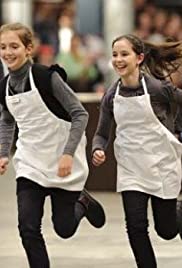 Junior MasterChef Australia is an Australian competitive cooking game show. It is a spin-off of MasterChef Australia, itself an adaptation of the British show MasterChef, and features contestants aged 8 to 12. The first season of the show began production in July 2010 and included 50 contestants. Over 5,000 children from around the nation auditioned for the series.

Gary Mehigan and George Calombaris returned alongside Anna Gare, while Matt Moran replaced Matt Preston as a judge. Callum Hann has also been involved in the series.