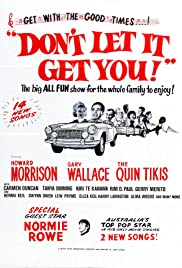 “The big ALL FUN show for the whole family to enjoy!” was the tagline for this musical comedy classic. Sir Howard Morrison (as himself) and Rotorua are the stars in the tiki-flavoured tale. Moving from Sydney to a Rotorua music festival the plot centres on a romance between a young drummer (Gary Wallace) and his girl Judy (Carmen Duncan) and the hurdles they face to stay true. But this is only an excuse for a melange of madcap, pep-filled musical fun. Made by John O’Shea’s Pacific Films, it features Kiri Te Kanawa, Lew Pryme and Aussie star Norman Rowe.

Watch Don’t Let It Get You