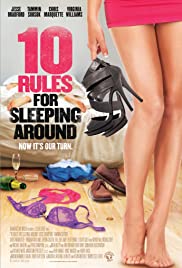 By following ten simple rules, 20-somethings Vince and Cameron spice up their relationship by sleeping around. But when their straitlaced friends get engaged, their relationship gets turned upside down. To put the rules to the test, they will go on the road to the Hamptons to crash the biggest party of the year where love triangles collide and off-the-wall mayhem ensues.

Watch 10 Rules for Sleeping Around